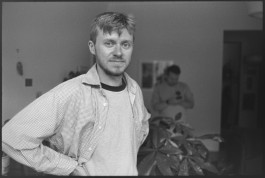 Alasdair (b.1993) is a Scottish artist working in the medium of photographic double exposures. His work blurs the lines between surrealist art and photography. He creates his art by shooting on analogue 35mm black and white film and then digitally layering two photographs together in Photoshop. He enjoys the technique of combining old and new technologies as it allows greater creative freedom and flexibility. The grainy quality that comes with an analogue camera is enhanced by the ability to select and blend particular images using modern software like Photoshop.

He is also a trained graphic and website designer, having previously set up and run a successful freelance business with a close friend where he worked with various clients in the arts and culture sector in Scotland. Although his focus has now shifted towards art he still occasionally works within this industry. His graphic design practice guides and informs the way he creates double-exposure artwork. He also credits his work ethic and drive to the time he spent working as a chef before starting his creative career.

Alasdair is undoubtedly inspired by his father, Alan Dimmick. A photographer himself, it was Alan who gifted Alasdair his beloved Olympus camera and first guided his passion for photography. Other influences on his work include artists such as Leif Podhajsky, Bridget Riley, Ayham Jabr, Vivian Maier, Glasgow-based Steve McQueen, Karen Vaughan, David Shrigley, Salvador Dali, Pieter Bruegel, Edward Hopper, David Hockney, Henri Carter Bresson and Francisco Goya. He is also inspired by 1960s cinema which you can see reflected in his work in pieces like ‘Crispy Rolls’.

Since starting his Lagoon project in 2020, Alasdair has transitioned to work on his art full-time and is proud to have shown his work in two solo exhibitions already.